MURAPOL CUP 2018 – Marek Konieczny the Tournament’s Organizer and President of the AP 21 Football Academy is sharing the information about the tournament with prostozboiska.pl.

It will be the 9th edition of Murapol Cup. Our tournament definitely belongs to the best football events for children that are organized in Poland, together with Lech Cup and Legia Cup tournaments. Each year, young players from the best Polish clubs and wonderful guests from abroad take part in our tournament. The same will happen this year. In recent years, we hosted in Krakow, among others, the following teams: Manchester United, Manchester City, Borussia Dortmund, Leeds Utd, Juventus Turin, Inter Milan, FC Nantes, Everton FC, Dynamo Kyiv, Dinama Zagreb, Celtic Glasgow, Willem II Tilburg, SC Heerenveen, Shakhtar Donetsk and Slavia Prague.

As the organizers of this event, we want our tournament to become not only the showcase of our Club, but also the city of Krakow.

The Ninth “Murapol Cup” Tournament will take place in Krakow on 8-10 June 2018 at the facilities of the sports center FAME Sport Krakow, ul. Dekerta 21. There will be 12 teams participating (8 foreign and 4 Polish) in the age category U11 (boys from 2007 and younger).

The beautiful cups, commemorative medals and prizes are awaiting for all participants of our event. The tournament itself has a special frame (draw of groups ceremony, opening and closing ceremonies, the special frame of final matches). In connection with the above, the tournament is very popular with both local and national media! The television coverage of this year’s event will be done by CANAL + and TVN stations as well as local media.

The program of the tournament includes the “Match of the Stars” in which many former Polish representatives, guests of Tomasz Frankowski and Mirosław Szymkowiak will play on the pitch.

The Honorary Patrons are: the Mayor of the City of Krakow – Jacek Majchrowski and the President of Polish Football Association (PZPN) – Zbigniew Boniek.

Our tournament is of a great interest among football fans. During the two days of the tournament struggle, many fans will visit us; mainly parents, as well as kids from Krakow’s schools. A large group also includes guests from abroad!

In addition to the sports’ emotions, we have prepared other attractions to our tournament’s participants, such as visiting the most beautiful places in Krakow, a city inscribed on the UNESCO list, as well as a trip to the Wieliczka Salt Mine. We want the time spent in Krakow to stay in the memory of the young footballers for a long time!

Trip to the Wieliczka Salt Mine

End of the tournament

For foreign guests who will be travelling to Murapol Cup I recommend to visit the site:

Below you will find the tournament regulations: 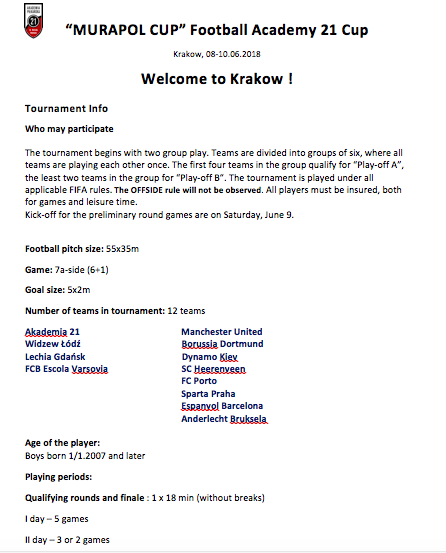 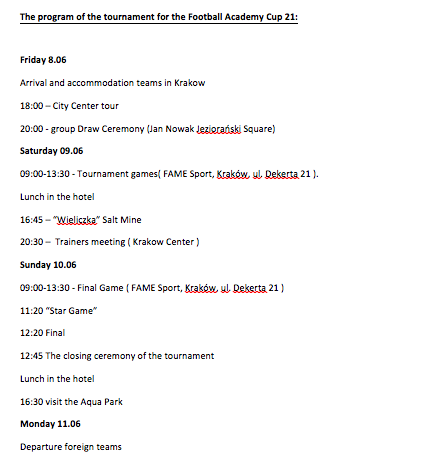 I talk to the head coach of U11 first team of Feyenoord Rotterdam football academy – Martijn de Vries. We observed your […]

On 25th November 2017 we visited Legia Cup 2017. The tournament took place at Legia premises (3 Łazienkowska street), under the balloon. […]

As I know how valuable the information “Where to eat” is for foreign visitors while participating in the football events abroad, I […]

Please tell me something about yourself. Hello, my name is Grzegorz Och. I have been football’s passionate since childhood. I started my […]