On 25th November 2017 we visited Legia Cup 2017. The tournament took place at Legia premises (3 Łazienkowska street), under the balloon. Competitors of the 2007 class representing European football academies showed a high level of technical skills and physical preparation. We liked the game Anderlecht Brussels versus Juventus Turyn the most. We were impressed with the speed of the game and individual skills the young footballers presented. Anderlecht delighted us with the joy and freedom of playing while Juventus with tactical maturity.

We have recorded the excerpts of three football games:

We invite you to watch them on our YouTube channel: prostozboiska.pl

If you are interested with how much time the young footballers that practise in five european academies spend on football training I invite you to read:

QUESTIONAIRE by prostozboiska.pl from the last edition of Legia Cup

the interview with the U11 Feyenoord Academy’s Coach (the participant of Legia Cup 2017). 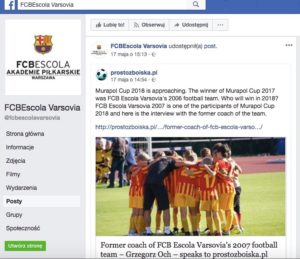